What is your training requirement ?

This event is history, please check out the List of Upcoming Seminars, or send us an email

Check out our related in-house workshops:

Bernard Tison is a J2EE Architect at Dolmen-JCS. His IT career started more than 10 years ago in the AS/400 technology. Later, he became a specialist in Lotus products. Since 5 years, he is a hard-core Java adept and is now responsible for architecting and implementing several critical J2EE-applications with his team.

Bernard was able to evaluate the EJB 3.0 specification and tested it on the JBoss implementation. He's an expert in J2EE and especially the JBoss application server.

Johan Kumps is a senior Java Developer/Analyst at Dolmen-JCS. He started his career in late 2000 and is engaged in developing and designing J2EE applications, mainly as a consultant. In this statute, he worked on several partner integration projects using web services in an SOA for the Belgian government. He recently joined the JBoss ESB developer community.

Kristof Vanbecelaere graduated in 1990 and holds a Master in Computer Science from Vrije Universiteit Brussel. He started his career as a software engineer for a spin-off company of the VUB in the area of client-server document retrieval systems. He developed object-oriented C++ GUI applications for colour management systems at Agfa-Gevaert.

Kristof spent 9 years at Sony developing operating systems and Java-based middleware for digital set-top boxes and integrated digital TV. In recent years he became a J2EE-convert and is now a Java Developer for JCS Int. with a keen interest in Java Server Faces as the main web technology for the next decade. 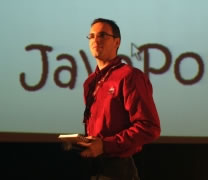 Stephan Janssen has been using Java since its early releases in 1995 with experience of developing and implementing real world Java solutions in the finance and manufacturing industries. In 1998 he founded JCS Int. a Sun authorized Java Center with an exclusive focus on J2ME, J2SE and J2EE since 1997. JCS is also the very first Belgian Java company to speak at JavaOne 2003.

He is also the founder and chairman of the Belgian Java User Group since 1996 and has been organising JavaPolis in Belgium since 2002.

Stephan was selected by BEA Systems as the first European (independant) BEA Technical Director and was recognized by the Server Side as one of the 54 Who is Who in Enterprise Java 2004. In 2005 Sun recognized Stephan's efforts for the Java Community and engaged him in the Java Champion project.

Questions about this ? Interested but you can't attend ? Send us an email !